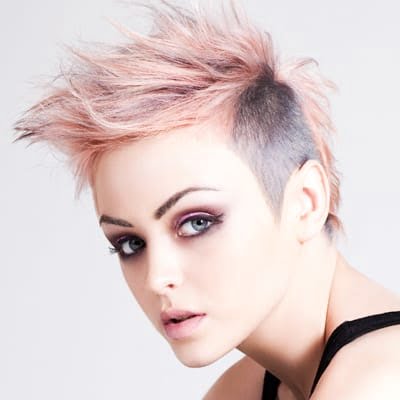 To coincide with the opening of our Kentish Town salon, we’re celebrating all things Camden. The borough stands as an epicentre of London’s alternative scene, thanks to its relevancy to punk; one of the most raucous, flamboyant and truly independent subcultures that the UK has ever seen. Politics and safety-pinned fashion aside, the movement spawned […]

To coincide with the opening of our Kentish Town salon, we’re celebrating all things Camden. The borough stands as an epicentre of London’s alternative scene, thanks to its relevancy to punk; one of the most raucous, flamboyant and truly independent subcultures that the UK has ever seen. Politics and safety-pinned fashion aside, the movement spawned a pretty impressive array of hairstyles too. From mega mohawks to colourful cuts, our stylists prove that punk is definitely not dead with these big, bold and beautiful creations inspired by the rebellious spirit of punk and its offshoots.

Though the mohawk has been inextricably linked to punk since the 70s, its roots go much further back. In fact, mohawks were first worn by the indigenous North American people of the Mohawk nation; so-called because they inhabited the Mohawk Valley in upstate New York. The earliest mohawks were created by pulling out, rather than shaving hair; leaving a three-inch square worth of hair on the back of the crown, these strands were then braided and decorated.

Since the 70s, mohawk hairstyles have commonly involved shaving both sides of the head and spiking the remaining section of hair upwards. This is created by backcombing, brushing and blow-drying or twisting the longer hair, and keeping it in place with styling gels or sprays. Some people have used a sugar and water solution, or even applied PVA glue to their hair so that it stays in place. Whilst this may keep your ‘hawk straight and sturdy, we don’t advise you to try out this technique; it’s bound to wreak havoc on your hair!

Instead, you can create a classic mohawk by blow-drying your hair upwards whilst it’s wet, then applying some product (not PVA glue!). If your hair is thick or curly, use pomade wax; gel is the best option for those with fine or very straight hair. Though you’ll be tempted to really go all-out with your product, too much of it will actually make your mohawk heavy and cause it to flop over. Finish the look by misting over your mohawk with firm-hold hairspray.

Nowadays, mohawks tend to be softer – particularly when it comes to women’s hair. Though they still have attitude, the overall look has been modernised. By leaving a little length at the sides and keeping the main section of the mohawk slightly messy or textured, the end result is less harsh. For an edgier take, experiment with a bold hair colour; lavender or pastel pink shades make for a fashion-forward finish that’s still going to make a statement. 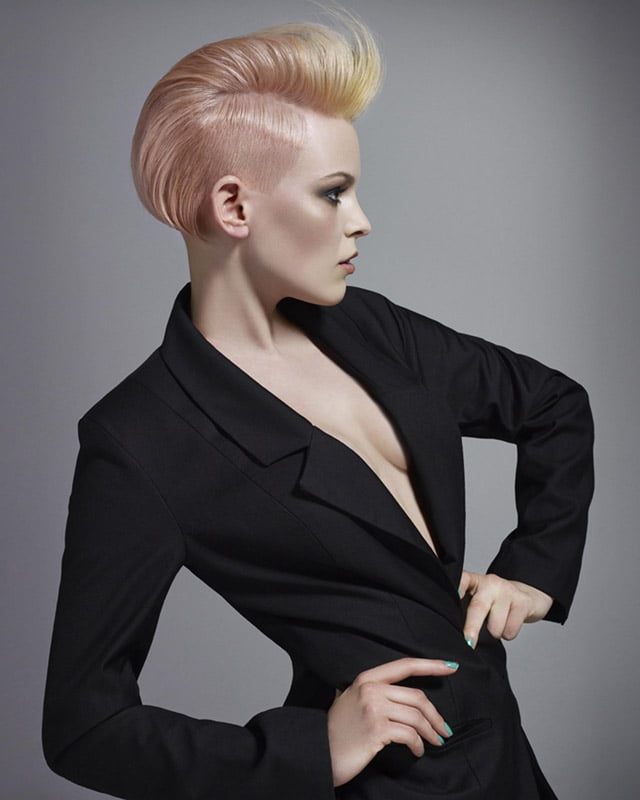 The mullet describes a hairstyle that’s short at the front and long at the back. During the 70s, every rock star worth their salt had a mullet. Since it’s popularity boomed in the age of glam rock, androgyny has always been linked to this hairstyle. Adopted by male and female icons alike, including David Bowie and Joan Jett, it was used to blur gender norms and rip up the rulebook when it came to how men and women chose to represent themselves. Towards the end of the decade however, the mullet had gone from ‘cool and shaggy’ to ‘ape drape,’ and by the noughties, it was a hairstyle that many of us tried to forget; after all, the ‘trucker mullet’ never really had the same rock and roll swagger as its predecessors.

Though in recent years, this retro hairstyle has made a high-fashion comeback. With designers such as Marc Jacobs, Jeremy Scott and Anne Sofie Madsen sending models down the runway rocking shaggy, cool-girl cuts, the mullet is (quite literally) back in vogue. This time around, Joan Jett’s legendary bangs have been modernised; a micro-fringe adds attitude whilst framing the face, and gives the cut a more polished finish.

Another facet of punk hair is colour. From deep, moody blues or blackberry tones to bright primary colours, standing out from the crowd is the truest mantra of punk itself – and what better way to make a statement than with a hair colour that’s anything but subtle? Today, colour tends towards the softer side; this mint green shade is a touch bolder than say, a pastel pink, but it’s still got that sought-after sorbet softness. Bold colours suit messier styles, so take a leaf out of Joan’s book and keep your mullet shaggy if you’re pairing it with a vibrant, non-natural colour. 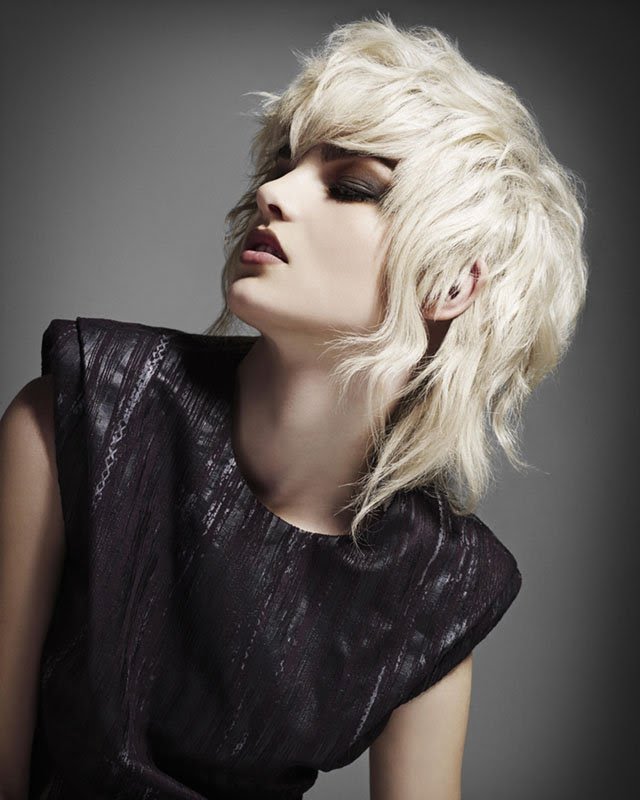 The introduction of punk led to a resurgence of the skinhead sub-culture, which had been prominent in the mid to late 60s. Though they referenced mod fashion, skins were closer to punks in that they took a political stance, and had a working-class image that set them apart from ‘peacock mods’ who wore the latest, more expensive clothes (conversely, skinheads favoured practical attire, like heavy work boots). Though some offshoots of the subculture have become notably divisive, it was originally influenced by Jamaican music and street-cultures, making it one of the earliest to embrace the heritage of the UK’s migrant youth. Widespread unemployment and urban deprivation during the late 70s and early 80s led to much disillusionment amongst the working class, which amped up the aggression associated with later manifestations of the skinhead.

Whilst shaved heads were the norm for male skins, women were more likely to adopt mod-inspired hairstyles featuring cropped cuts and rounded fringes. Feather cuts, or the shorter Chelsea cuts, were the staple hairstyle for women of the scene; closely shaved at the back, they featured brow-resting full bangs and sometimes side fringes too.

Today, the cut can be worked to suit alternative styles that aren’t necessarily defined by a particular subculture. Like the mullet, it features sections of varying lengths, but this time, there is more weight to the front. Short, choppy and shaved sections make for an even edgier finish, whilst angular lines keep it contemporary. Use a pomade wax to showcase the varying lengths and add texture to the top of the head; spiked sections are great for creating a dynamic look that’s edgy without being overly harsh. 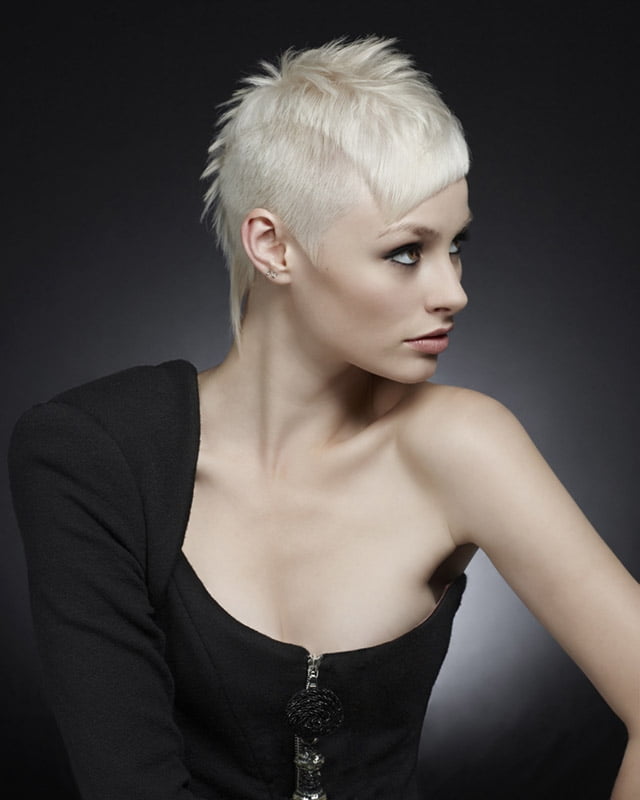 Learn more about our upcoming Kentish Town salon and book today for 50% OFF!