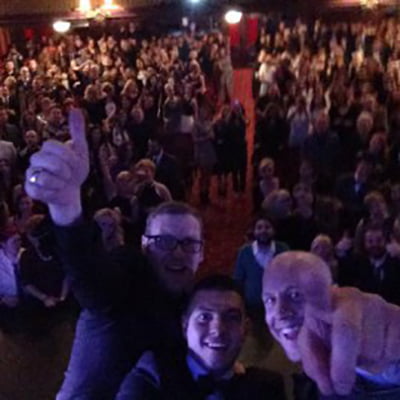 On Sunday 25th January, we held our annual Rush Oscars Awards at the glamorous Pheonix Theatre in Soho, London. The prestigious awards highlight stylists, assistants and Rush salons that have performed the best throughout the year. Amongst a packed theatre of salon stylists were industry heads from Creative Head, HJi, L’Oréal Professionnel and our top suppliers. Hosted by […]

On Sunday 25th January, we held our annual Rush Oscars Awards at the glamorous Pheonix Theatre in Soho, London. The prestigious awards highlight stylists, assistants and Rush salons that have performed the best throughout the year.

Amongst a packed theatre of salon stylists were industry heads from Creative Head, HJi, L’Oréal Professionnel and our top suppliers. Hosted by our charismatic International Artistic Director, Andy Heasman and our witty International Colour Director, Chris Williams the show was guaranteed to be entertaining. The duo were announced as celebrity hosts Ant & Dec, wearing masks to disguise themselves, which started the night off with a good laugh.

Rush’s Co-founder & Chairman, Andy Phouli took to the stage to talk about the growth of the company throughout the year, future plans and how staff can get involved in the exciting plans coming up. A key statement in his speech was, ‘We plan to open 40 new salons this year!’ stirring excitement and a roar of applause throughout the audience.

It would not be a Rush awards without a dance celebration so, Rush Co-founder & International Creative Director, Stelios Andrew, invited the audience on stage for a quick celebration, taking the night to another level!

The night was filled with surprises with the most prestigious of all, Artistic Team Award, given to Jamie Benny and Dale Herne, now the newest members of our award winning Rush Artistic Team!

THE RUSH OSCARS AWARD WINNERS ARE:

“I am honoured and grateful to have received this award, and am looking forward to a long and successful career with Rush”

Front of House of the Year 2014
POLLY FRIEND • PICCADILLY

“I feel very honoured to receive this award. Thank you to all my team at Piccadilly for their love & support!”

“I love working for RUSH and I am very grateful for being recognised it goes to show hard work pays off.”

Retailer of the Year 2014
JEFFREY CHANG • ONE NEW CHANGE

“We are all beyond happy and so proud to have Chiswick back on the map!”

“I would just like to say how honoured and overwhelmed I am for receiving not only the nomination but winning new comer of the year 2014. I’d like to thank RUSH as a company for giving me the opportunity to work for them. I would like to thank my team in Sevenoaks as they have all put in so much hard work and working with them is a pleasure. I couldn’t have done it without them. Here’s to 2015!”

“Thank you everyone for an amazing night at the awards. I would like to thank George again for my award.”

“Massive thank you to the Rush boys Andy, Stell, George and Peter for allowing me to grow and learn within an amazing team in a great company. Congratulations to all the other winners and finalist’s on the night, all thoroughly deserved. Bring on 2015! X”

“The team feel so proud and honoured to be rewarded for all their hard work, as one of the longest standing salons, we never take anything for granted. It’s amazing to be acknowledged for giving it 100%.”

Driver of the Year 2014
OMORFI TOPALIDOU • ONE NEW CHANGE & LUDGATE

“I feel over the moon to win Driver of the Year award again, really grateful for all the support and recognition I’ve received from the company for the last six years! Massive thanks to the Rush Family.”

“Becoming a part of the Art Team means so much to me, going from an Assistant to representing the company in a prestigious way! What a journey! Loved every minute of it, now it’s a honour to be part of the Artistic Team and for me to be fulfilling a dream that started 11yrs ago. TEAM RUSH, HONK HONK”

“It’s such a great honour to be a member of the Artistic Team. To have progressed so much since starting with Rush and now ready to live the dream and keep pushing the brand forward. With passion and creativity comes power!”

“It’s a great honour to be recognised for all the work I have put into the brand this year. I really have given it everything to have won the British Hairdressing Awards and this award is the icing on the cake.”

Find out more about Rush’s teams and their creative achievements

Beauty Salon of the Year 2014
CROYDON

“It was great to receive the award once again. Client care is our priority.”

“To win the Franchisee of the Year award means the world to me. Rush in Reigate has been my passion for the last 5 years. It’s been hard work but a lot of fun too with my great team backing me. Massive thank you, onwards and upwards for 2015! Let’s have a great year!”

“I’m thankful for my team’s hard work and commitment over the last year it wouldn’t have been possible without them behind me.”

Franchise Salon of the Year 2014
MOORGATE

“We are proud to work for RUSH MOORGATE – Our hard work has paid off, we have a connection and are a true unit.”

Salon of the Year 2014
ONE NEW CHANGE

“Salon of the Year is an award to recognise the loyalty of clients retained by a strong team working ethic. I am really proud for this award as it proves that the team really work well together. Hard work always pays off.”

Find out more about working at training at Rush