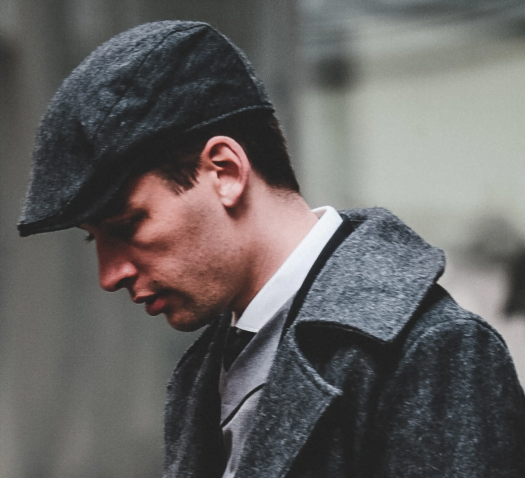 Get the Peaky Blinders hairstyle

It’s not unusual for popular TV shows to influence the way we dress and style ourselves, just look at Mad Men, which sparked a widespread fascination with slick early-60s Madison Avenue style not so long ago. Nonetheless, the influence that Peaky Blinders, a gritty crime drama set in post-WWI Birmingham, has exerted on contemporary fashion […]

It’s not unusual for popular TV shows to influence the way we dress and style ourselves, just look at Mad Men, which sparked a widespread fascination with slick early-60s Madison Avenue style not so long ago.

Nonetheless, the influence that Peaky Blinders, a gritty crime drama set in post-WWI Birmingham, has exerted on contemporary fashion feels somewhat surprising. On the face of it, Peaky Blinders has none of Mad Men’s obvious style and glamour, and the streets of 1920s Brum are hardly an obvious hunting ground for contemporary trends. And yet, here we are – the Peaky Blinders look is everywhere.

While there has definitely been a sartorial dimension to the popularisation of the Peaky Blinders look – a ‘Twenties-inspired look typified by heavy fabrics, cropped trousers, sturdy boots and baker boy caps’, as summarised by Esquire – the show’s most pervasive stylistic influence has probably been on mens hair. While full-on Peaky Blinders-style tailoring has remained a fairly niche look, the ‘Peaky Blinders-cut’ has gone well and truly mainstream.

Here’s how to get the post-war Brummie gangster look.

How to get Thomas Shelby’s disconnected crop

Worn by Cillian Murphy (who plays lead gang-member Thomas Shelby) the show’s most iconic cut is a strong style, perfectly accentuating his admirable bone-structure and complementing a look that’s equal-parts hard as nails street fighter and dandyish pretty boy. It’s also rather easy to achieve. Which isn’t to say it’s a look that will suit everyone – obviously if you’re blessed with Murphy’s sharp cheekbones it’s a winner, but it should also suit anyone with a well-defined oval face.

This sharp cut fits with Shelby’s recent past in the First World War trenches, when soldiers shaved their hair to avoid the spread of lice. But, despite such pragmatic – and kinda gross – roots, it’s a hipster-friendly style that looks equally at home on the streets of Dalston as the trenches of Passchendaele.

The cut is pretty simple. Essentially, you’re after a crop with enough length on top to achieve Shelby’s sweeping, texturised fringe – around two to three inches should suffice. This cut is all about the stark contrast between the hair on top and the severe back and sides, so you want it to be disconnected rather than faded.

To achieve Thomas Shelby’s sweeping, slightly messy fringe you’ll need a good pomade or wax, which should be applied sparingly while sweeping your fringe to one side. Use gentle circular motions to create an artfully messy finish.

Variations on the Peaky Blinders cut might err more towards Artur Shelby’s undercut. The eldest of the Shelby siblings favours a slicked back disconnected undercut. You’ll want to keep plenty of length on top and slick back, with a comb, using a strong hold pomade that provides plenty of hold and a slick, shiny finish.

To recreate any of this look visits our Birmingham Hair salon or your nearest Rush Hair salon.