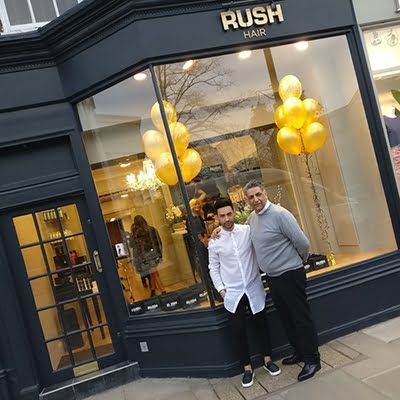 In preparation for the opening of Rush Wimbledon Village the salon held a spectacular event. The event took place the evening of Thursday 16th March with people from local businesses in attendance. This special event was to offer a late night sneak peek of the beautiful, new trendy Rush hair salon. Rush Hair treated the […]

In preparation for the opening of Rush Wimbledon Village the salon held a spectacular event. The event took place the evening of Thursday 16th March with people from local businesses in attendance.

This special event was to offer a late night sneak peek of the beautiful, new trendy Rush hair salon. Rush Hair treated the guests to the Rush experience and gave them a chance to meet the Wimbledon Village team. This consisted of Salon Manager Dario Mirao.

The night was a success with the community coming together in large numbers. Local business owners, Managers, and workers from the local boutiques in the village turned up to show their support.

Throughout the night glasses of prosecco and delicious mouth-watering canapés flowed. The guests enjoyed these as they mingled with other guests and explored the salon.

On the night various hair stations were set up around the salon to cater for the guests hair needs. This gave the Rush Hair Wimbledon Village team a chance to show off their skills. The team provided a selection of complimentary services to the guests. These services included a range of beautiful mini blow-dries (Bouncy, Straight and Lux) to ghd styling (Straight and curly). If a guest didn’t want a restyle, the option to have their hair styled or touched up was on offer. The stylists were also offering braiding and ghd curls. Each transformation was bespoke to each guest, ensuring they left the seat with a smile and rushing to take that all-important selfie.

Councillor Stephen Alambritis, Leader of Merton Council attended the evening. He took it upon himself to say a few lovely welcoming words:

Councillor Stephen Alambritis, Leader of Merton Council then extend he thanks on Twitter:

With thanks to @RUSHHairBeauty for their investment in Merton in coming to Wimbledon Village. Already in the Broadway #Greekstogether https://t.co/p0gLbeHHiQ

To thank guests for attending and showing their support they enjoyed a lovely goody bags. The goody bags contained Shu Ueumura and Rush Hair goodies and much more, ensuring the Rush experience lasts.

Rush Hair Wimbledon Village is now open! You can find the stunning salon at 37 High Street, Wimbledon SW19 5BY, around the corner from Wimbledon Common. It joins a selection of beautiful chic boutiques, cafes, shops and historical buildings. Rush Hair Wimbledon Village is salon number 87 of the Rush Hair chain. Reinforcing that the salon chain is growing from strength to strength. With several awards under their belt there is no wonder they have already opened 3 salons in 2017 so far. With many more in the pipe line that 100 salon mark in now becoming in touching distance.

Rush Hair Wimbledon Village is home to one of the most iconic sporting events of the year, The Wimbledon Tennis Championships. Thousands of people attend this event every year and it the must attend sporting events. Come rain or shine the locals and people from all over the world travel to watch this sporting event.

You can now pop into Rush Hair Wimbledon Village. Their doors are now open and the team are available to take appointments. You can pop by to admire the beautiful interior or to book in with one one of the team for a complimentary consultation or service. There is a wide range of services available at Rush Hair Wimbledon Village especially if you are looking for a hair transformation. Select from colour, Hair Extensions or Brazilian Blowdry. With every appointment enjoy complimentary refreshments, nibbles and indulgent head massage.